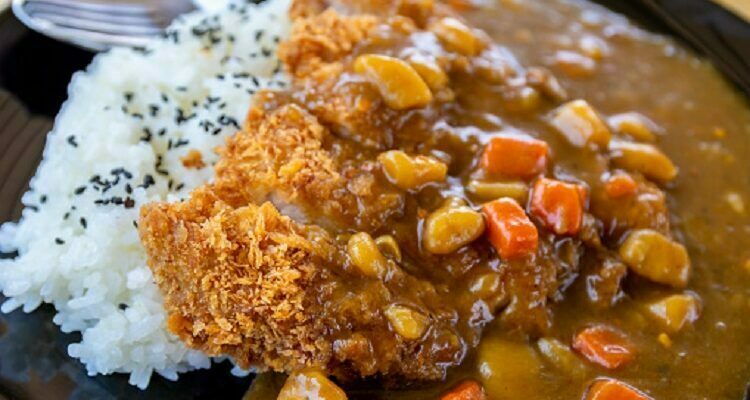 Katsu curry is an iconic, Japanese dish that has been served for many years and has gained global recognition. If you are a Katsu curry lover or you are keen to learn more about this dish then we have the information you need. Read on to find out more about this delicious curry dish and how it came to be!

The history of Katsu is not as simple as you may think! In fact, the Katsu curry was brought to Japan by the British during the Meiji era and was adopted by the Japanese, who still recognise the western roots of the dish. This curry was sweet and mild to taste and typically served with rice for a complete meal.

However, Katsuretsu was a dish that was invented in Japan and traditionally used breaded pork cutlets as the main ingredient and it later became known as Katsu too. As time has passed, Katsu recipes tend to use both inspirations and combine breaded meat with curry sauce for Katsu yummy-ness!

Who Invented the Katsu Curry Combination?

Popular belief states that Shigeru Chiba, a professional baseball player, first came up with the combination. He regularly ordered both tonkatsu along with rice and curry as separate dishes but one day asked for them to be plated as one meal, creating the dish that is known and loved today. Whether or not this was the origin of Katsu curry as we know it is disputed, with plenty of other theories and ideas being shared across Japan and further afield.

As Katsu has grown in popularity, the meal has evolved and there are now a huge range of Katsu variations that you can enjoy. Some of the most popular variations include:

Where is Katsu Curry Popular?

Katsu curry is a popular choice across Japan, with many people enjoying this Katsu variation as a filling main meal. However, it is also popular across the globe and has become a staple dish in western diets, especially in America and the UK.

The main reason that it grew in popularity across Japan is that it was simple to make and easy to pair with most types of protein. Most Japanese households will have their own Katsu curry recipe that they will enjoy on a regular basis.

The reason for the growing popularity of this dish in Western culture is down to the popularity of Japanese restaurants in these countries. As more people experience the joy of Japanese-style cooking, the greater the demand becomes for recipes that consumers can follow at home to create their very own Katsu curry when they want it the most!

When it comes to working out the calorific value of your Katsu curry, you will find that the curry sauce is both low in fat and calories and is great paired with rice for a filling meal. However, the breaded meat and vegetables that are served with the curry sauce and make your meal very unhealthy as they are deep fried before serving.

The good news is that you can reduce the overall calories by breading and oven cooking or air frying your meat or vegetables, reducing the amount of oil needed significantly. If you are keen to deep fry for an authentic outcome, then remember to drain the food properly, patting all excess oil off for the best results.

If you are keen to try and recreate the traditional Katsu curry recipe at home then we have the information you need. First, the ingredients you will need to get include:

Once all your ingredients are prepared and measured, you’ll need to cook your onions, garlic and ginger until softened before adding in your turmeric and curry powder, mixing in and letting the spices cook for a few seconds.

Then add your flour and mix around before adding your stock a bit at a time, ensuring there are no lumps. Mix in your coconut milk and some soy sauce to get the Katsu curry colour we all know and love and then finally, strain the sauce through a fine sieve to remove the onion, garlic and ginger pieces and then serve with your chosen food.

What is Katsu Curry Sauce Served with?

In traditional cooking, Katsu is a breaded pork cutlet that has been coated and deep-fried before being served to eat. When Katsu curry first became popular, you would often find it served with breaded pork but this option has dipped in popularity, with people now preferring a healthier meat option whenever possible.

These days, most people like to serve Katsu curry sauce over rice and breaded chicken breasts but you can use it in any way you like, including putting it over breaded seafood, vegetables or just having it with rice on its own. Because Katsu is such a great taste, you will find that it adds something special a number of dishes, even if they aren’t traditional Japanese ones!

Why You Should Try Katsu Curry Today!

If you love a curry and want to try something slightly different but just as delicious then Katsu curry is a great choice. It is a mild curry and has sweet notes that create a flavourful dish that you are sure to love. It’s popular with people of all palettes and has become a global phenomena that you should definitely add to your menu sometime soon!

4 Effective Ways To Maintain Cybersecurity At A Business

Things to Consider Before Ordering a Meal Delivery Kit

Reasons Why Pizza Iis Actually Healthy for People in Hornsby

Why is it a good idea to learn cooking?